The Story of Carol Hen 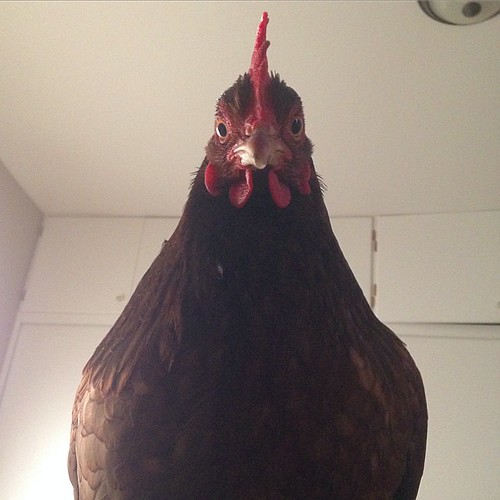 Carol came to us from the Seattle Animal Shelter in April 2011. We went to pick up Fabio, a sick silkie rooster. But when we arrived at the shelter Carol was there as well, so we took her too. 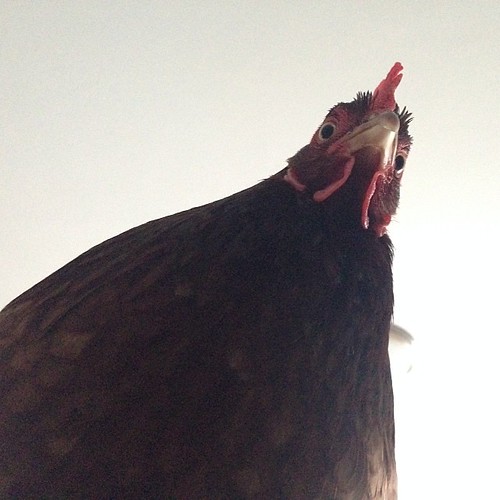 At home, Carol immediately let everyone know she was a fierce wild child. A bad-ass honey badger. Carol was one of the most feral animals I’ve ever rescued. Skittish and on guard and independent. 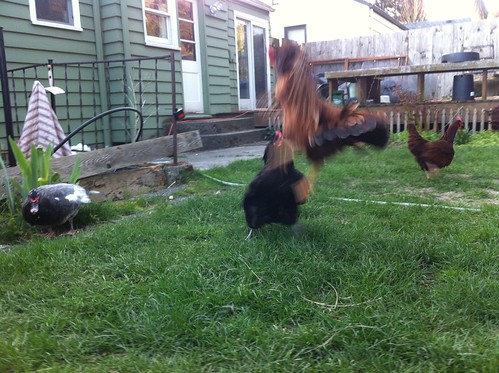 The story was she was found wandering in North Seattle as a stray. I wouldn’t be surprised if she got kicked out of her first home though. Carol took care of #1 and beat down anyone who got in her way. She treated every meal, plant, treat or shelter as if it were a war she had to fight and win. 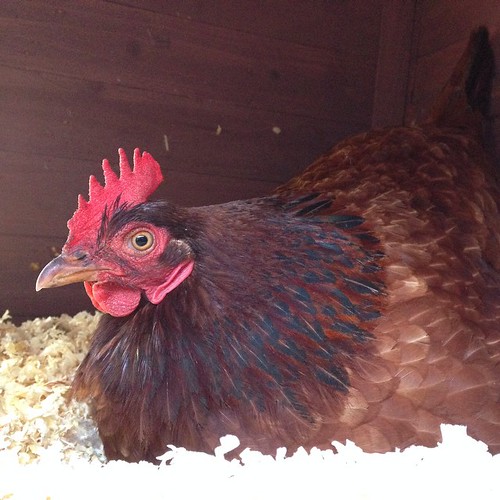 She fought her way to the front of every line and took over the entire chicken coop, refusing to share the expansive 5-hen perch with anyone. Honestly, she caused a lot of chaos in the flock. But it’s often the most high-maintenance pets that wiggle their way deep into our hearts. And that was certainly true of Carol. 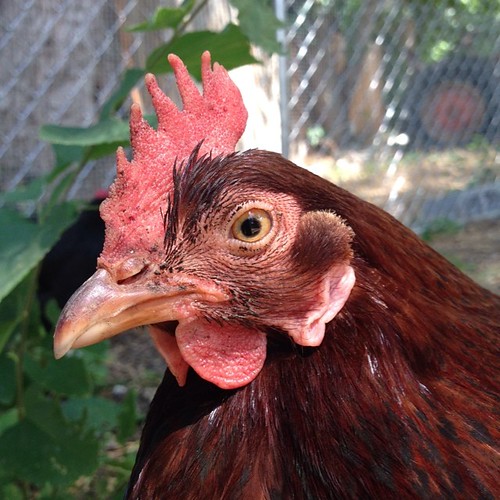 As fierce as Carol was, she eventually settled in. Her “fight all the things for survival” instinct turned into a tolerable bossy nature. Everyone learned to stay out of her way and that suited her just fine. 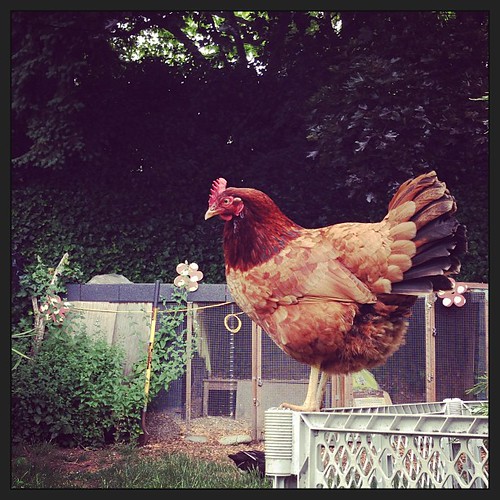 In the summer of 2013 I took time off of work. During that time off, I spent a lot of time with the flock. Almost every day I’d take an afternoon nap with them, and when I’d wake up, Carol and the other hens were usually perched on me. It was a very special time and the flock really learned to trust me and consider me one of their own. Spending hours each day with Carol revealed just how smart she was. She was extremely talkative and interactive.

Losing Carol hen has been difficult. She was such a special, sweet girl and we became very close over the years. I was sad to lose Si, and really disappointed that after all she’d been through she didn’t get a few more years of the good life. Olivia was a sweet old hen and easier to say goodbye to because she was over 13-years-old. Olly Astro was difficult because she was fine, then I noticed she had trouble pooping and then we had to say goodbye. It happened so fast.

And that leaves Carol. Since I had tried with vets to drain the belly fluid from Si and that only bought her a few extra months (4 months I think), I decided to try spaying Carol in hopes she’d gain more years. She didn’t. She lived 9 weeks after spay surgery, which means she had pretty advanced cancer when she was spayed, but it was not easily visible at the time. Even two weeks before she passed I had her back at the vet, concerned, and they couldn’t tell anything was wrong from the outside. But I knew.

When Carol was at the vet for the final time, people kept asking me what the vet was doing. Is she getting an implant? Why a shot of Lupron and not a Deslorelin implant? Who spayed her? When did that happen? What’s happening now? NOW HOW IS SHE?! HOW IS CAROL!?!!?!?!?!? It was frankly overwhelming. I know everyone means well but it just was too much. Imagine your child is having an asthma attack and you’re in the ER and it’s not looking good and your kid is turning blue and you start getting urgent messages and posts and people you sort of know who want to hear “how’s your daughter’s breathing tube? Did they intubate her? Is she crying? At least she’s breathing. Why haven’t they tried steroids!? Have you tried tea tree oil? WHAT IS HAPPENING!? WE HAVE NEVER MET HER BUT WE’VE SEEN PHOTOS!!!”

Our Facebook page is a great place 99.9% of the time. But it is not good when there’s a crisis. In the future I likely won’t share in real-time when a crisis is happening. It’s too much to deal with that has no bearing on the crisis. It’s a huge distraction that makes me want to shut everything down and never share again. And no one should take that personally. It’s just the nature of social media. I’ve learned my lesson.

That said, I sure appreciate everyone’s notes so much now that Carol is gone. Over 400 comments of condolences about my rescued chicken on Facebook and other social media. Four hundred. How amazing is that? I’m pretty certain that when I die I won’t get 400 people leaving comments. Carol was just that special.

In retrospect, and now having had quite a few chickens over the years, I asked the vet “what should I do differently with any future theoretical chickens?” He said – and by the way Carol’s specialized vet is sort of renowned for his work spaying hens and ducks – he said he has seen some success in reducing cancers by changing a hen’s diet to include 10% flax seeds. So there you go. Research shows flaxseeds help. So far just in chickens. No research on how it could help ducks yet. For anyone who has hens, add some flax seed to their diet. He also said he has seen cancers in hens even 2-years-old, so spaying Carol at 5+ years was probably too late. Olly Astro was spayed at a few years old when she had 21 stuck yolks in her system by our Seattle vets. And that was successful and bought her a few extra years. But she still only lived to be 5-6 years old. That’s unfortunately a pretty typical life span for an egg-laying breed of hen.

When our vet called back after Carol was euthanized and he was able to look more closely at her, that’s when he told me she was full of cancer. There was nothing to be done. That was both a relief to hear and also very sad for me. I had her spayed. I knew that she might not have much time. I took her to the vet two weeks before she passed. But I was somehow still in denial. I went from “hmm I should make her an appointment” on Friday to “Oh shit! She’s uncomfortable!” on Saturday to “F#$K!” right after that. And then she was gone. One day she went with me for coffee. Then we said goodbye. I just wasn’t ready.

But then, how I could never be ready to say goodbye to that sweet face?

For as fierce as Carol was when she first arrived, there was a vulnerable, needy sweetheart underneath all that attitude. 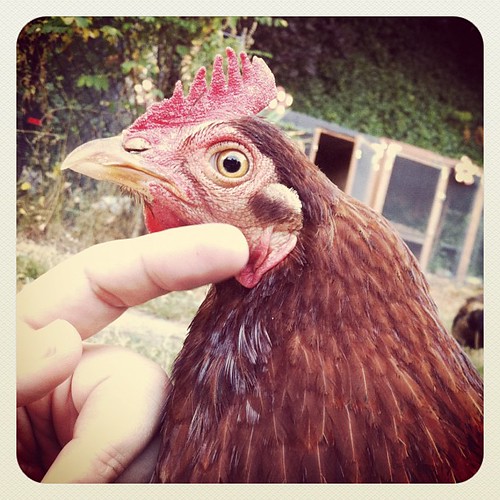 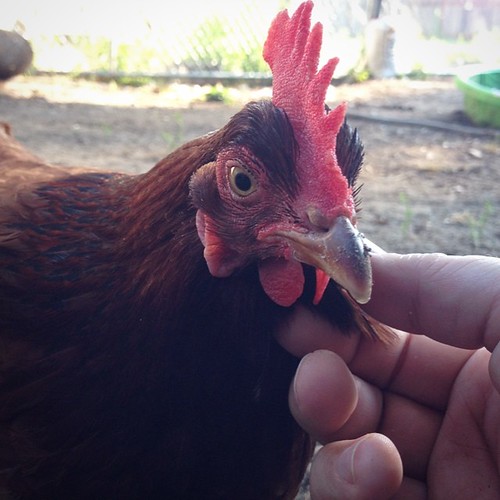 She was a clear communicator just waiting for a human who could understand what she was saying. She was a loyal friend. A lovable kid. A trusting family member. 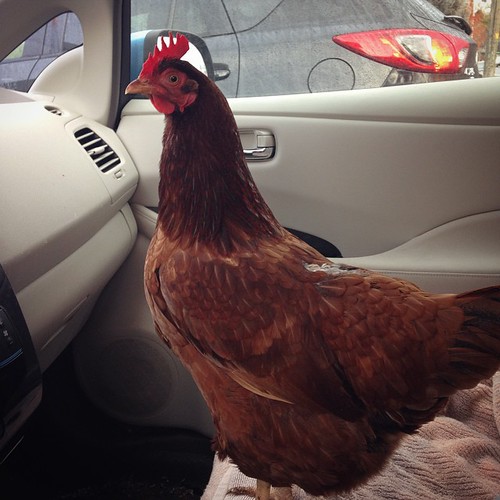 She was a very special personality who just happened to be in a chicken package. And I’m so very lucky to have known her. 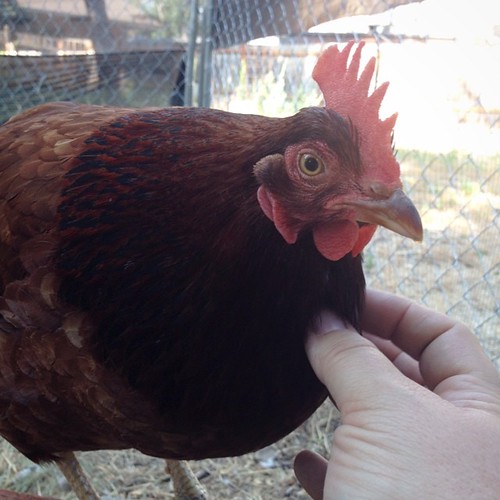 I know many people shared in her antics, but I hold her very close to my heart, even though she’s gone. I held her in my hands every day. She wasn’t an online phenomenon to me. She was my special care bear, and there will never be another one like her. Oh little red hen, I miss you. I love you. 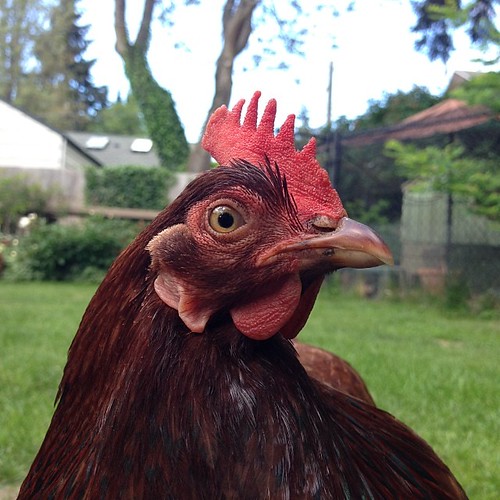