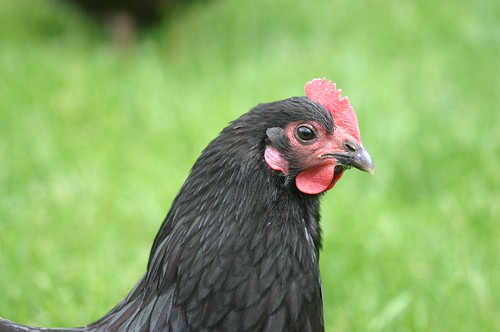 Olly Astro, our rescued australorp hen, came to us in 2010 after being surrendered to our veterinarian in Seattle. She had pneumonia that wasn’t getting better, and her owners were tired of trying. So the vet kept her and treated her for 8 weeks to clear up her infection. Once she was finally feeling better, she came home with us. When we went to pick Olly up, we found out she made a friend while she was in the vet hospital. Chickens are well known for their good networking skills. So Olly Astro came home along with her friend Janet. Our only hen at the time was Olivia, who just passed away this past December. Olivia was none too keen on having new lady hens around, and she spent her every waking moment making sure they knew she did not approve of their antics. It was good for her to have a new distraction and hobby, even if her hobby was taunting Olly and Janet. 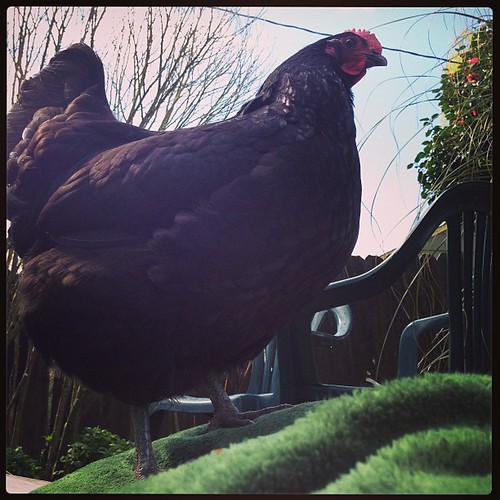 In time, all three hens became good friends, and Olly actually took top spot in the flock for a while. She got along well with most everyone. While she liked people and their treats, she was never much for being held or petted. 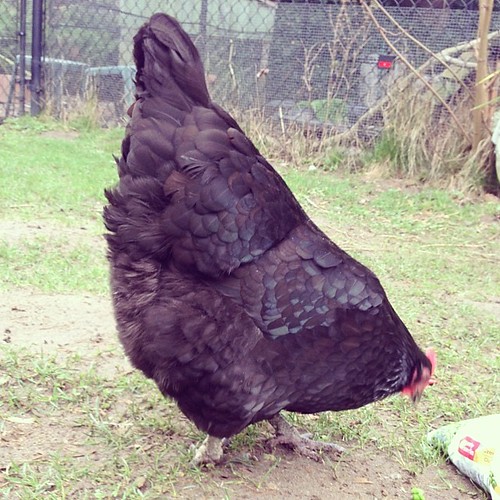 Her favorite thing to do was hunt for bugs while keeping a perfect triangle shape as she dug in the dirt. She was a great, great triangle. 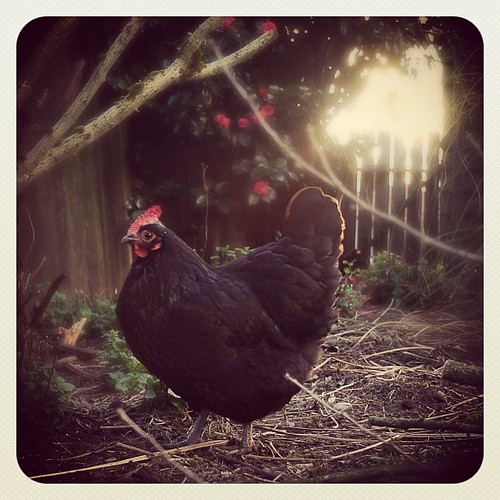 Every chicken has their own sound, and Olly’s sound was “hoppah.” Janet made a “gu gu gu gaaaaah” sound which reminded me of the song “I gotta be meeeee!” And Si Si made a sing-song sound like “Gaboooo” which reminded me of “helloooo.” Olly’s “hoppah” was very matter of fact, kind of quiet and a little serious. There was no sing song to her talk. She was all business. 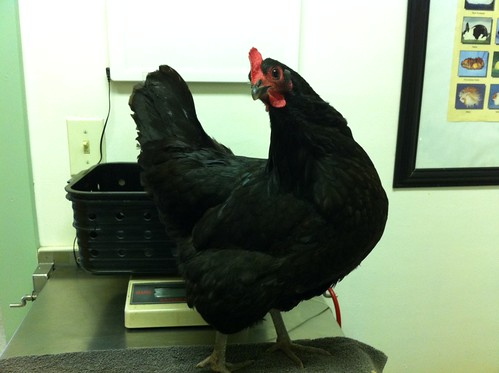 Olly had a sweet, kind and laid back personality. A little bit quiet but she did make sure she got her share of treats. Over the years she had her share of health problems. In addition to recurring respiratory infections and breathing issues, she got the last egg of the season stuck inside her once, and laid 21 internal yolks the following spring. 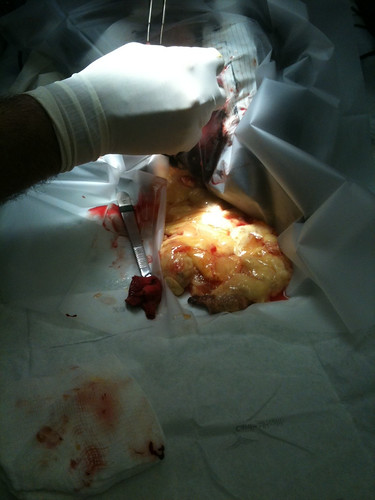 She had partial spay surgery in hopes to reduce her reproductive issues, as well as having all the yolks removed. She continued to have issues each spring, but never as bad thankfully. 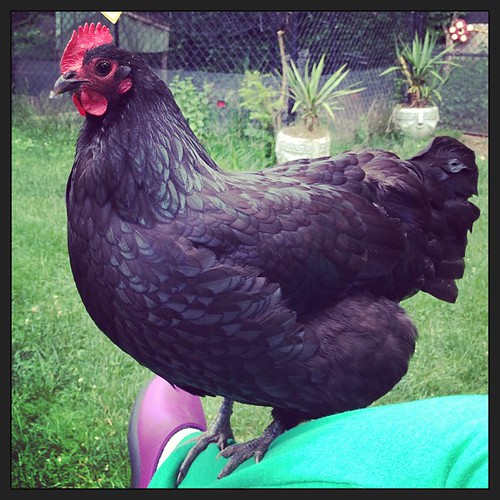 Our records show she was likely born in July of 2009. That made her 5 years and 7-8 months old. For an egg-laying hen, that’s pretty average or even on the old side a bit. I wish she could have lived to be as old as our bantam Olivia lived, but it wasn’t meant to be. 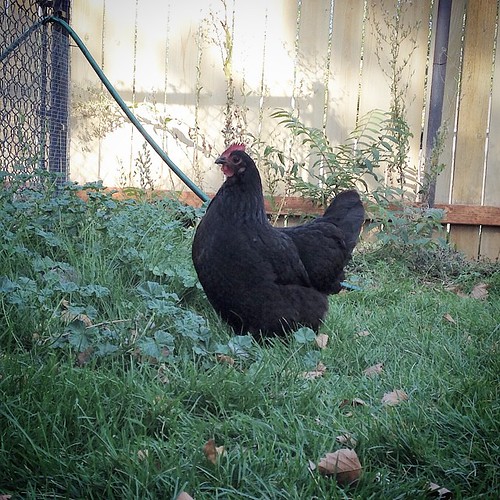 Last week I noticed she was straining a bit to poop, so I took a good look at her. Her belly felt okay, so I gave her some extra water and watery treats. She continued to have trouble, so we got her into the vet’s office. Unfortunately, her abdomen was so full of reproductive tumors that they were pushing her other systems out of the way, making it difficult to expel waste. 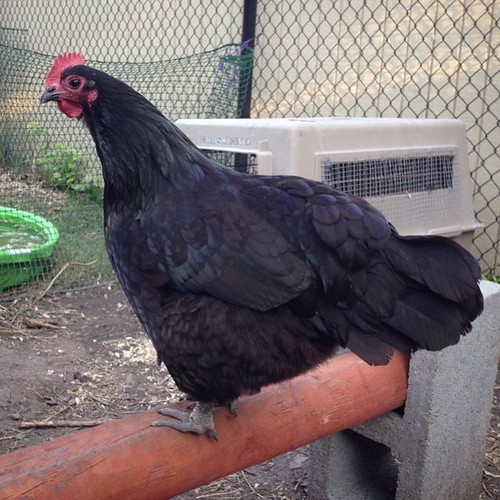 Sometimes with old hens, the vet will let me bring them home and let them pass naturally. But in this case, the vet was very clear to say she recommended euthanasia because waste backup would be very uncomfortable for Olly. We agreed and asked to be with Olly when she was euthanized. 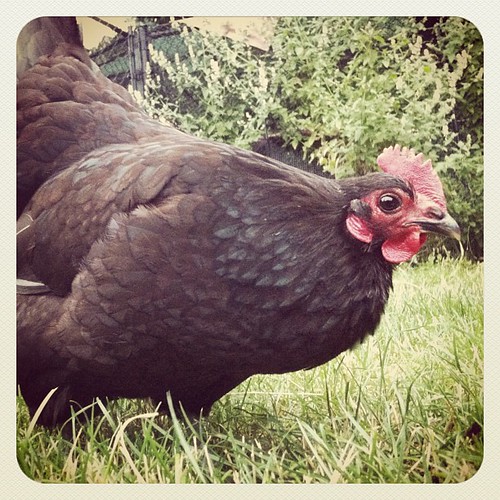 I brought some fresh corn treats for Olly and sat with her in the lobby of the vet clinic while they prepared for her. She was in good spirits and loved her corn treats. She perched on my crossed leg and let me tell her what a wonderful, sweet hen she was… my little hoppah. 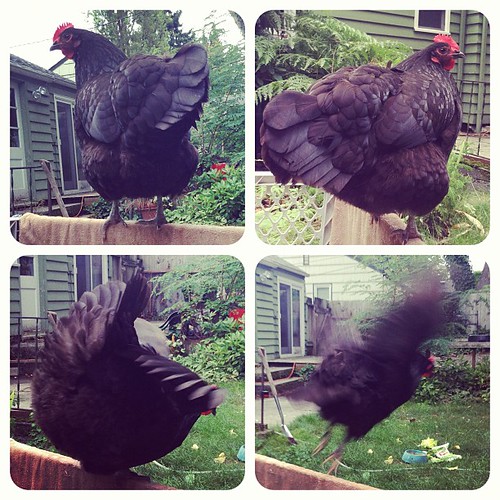 Then it was time to give her a sedative and let her go to sleep. She needed two sedatives, but she let me hold her in my arms until she was fast asleep and limp. At that time the vet administered the euthanasia drugs and Olly flapped her wings and was gone. 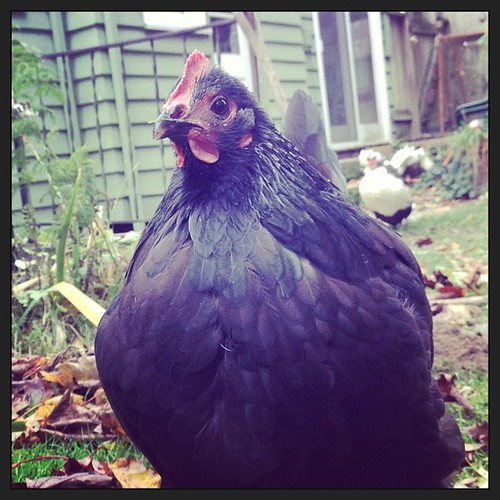 Olly Astro, in spite of her recurring health troubles, was never any trouble. She was always a sweet, wonderful and beautiful hen. A good kid who enjoyed life and loved to hunt for bugs. She made many friends in her life, and I know they will all miss her. 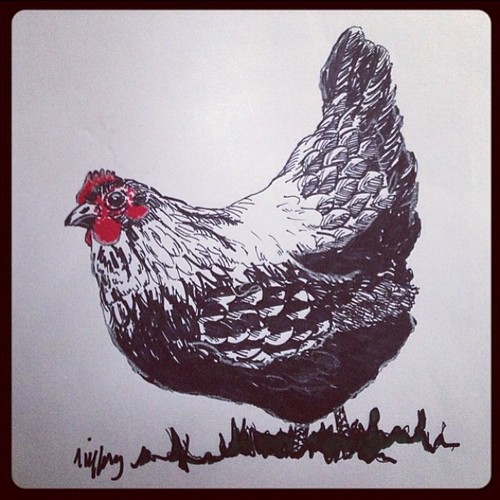 Rest in peace, my little hoppah triangle. I love you.