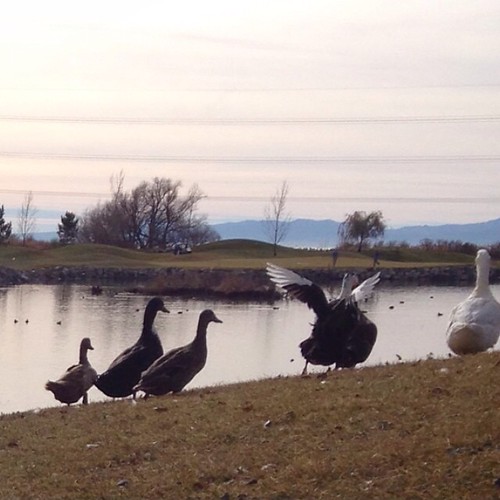 Today we took the Sugarhouse ducks to their forever home.

Thanks to everyone who made donations, we were able to write a check to the caretakers for $500 for feed for the ducks and geese at the private pond, as well as pay back ourselves for the fencing and materials bought to rescue the ducks. We also have a reserve that we’ll save ’til spring to make sure the ducks have long-term feed and also a veterinary fund in case one gets a sore leg or whatnot.

The ducks were super happy to be at their new digs. They looked around a little bit and then promptly jumped into the pond. They splashed around quite a bit and then started exploring. Where I’m standing is the caretaker’s yard, the family that owns the entire pond and holds all rights to its use. They are the ones who feed the rescued ducks and geese placed there. These 6 Sugarhouse ducks join 18 rescued geese placed here by Ching Sanctuary and 6 other rescued domestic ducks. The private pond has an island that the ducks and geese can sleep on for protection. And unlike the Sugarhouse park pond that froze over, this private pond is fed by a natural spring that never freezes.

A note about placing ducks:
A private pond with an island for safety and twice-daily feeding is a good setup for park-savvy domestic ducks like these. It is the standard for large-scale sanctuaries and is the preferred setup of many of our rescue friends across the country, from large organizations to small one-person backyard ponds. Unlike my own flock of handicapped, old, limpy ducks and clucks who stay in an aviary, the Sugarhouse ducks are young and in good health. They are extremely skittish around people and would not enjoy a small backyard setup with tiny pools, people and kids. They don’t want to ever be held and they prefer to be away from all people. They are not pets.

In my own past decade of rescuing ducks, I have placed dozens of ducks in all sorts of setups. In the beginning, I looked for single-family homes with predator-proof night enclosures. But year after year, the ducks that did best and survived the longest were the ones who had access to a large body of water, especially if they were also placed with geese. So with three references and an in-person inspection of this private pond, I’m inclined to trust the local sanctuary who helped us find this placement, the other people who helped rescue and place the domestic geese at the pond and the caretaker/owners of the pond. It breaks my heart a little bit every time I rescue a duck and have to place it somewhere other than my own aviary. But I do my very best to find the right placement for every duck or group of ducks. For anyone who disagrees, I invite you to head to your own local park and look for dumped domestic ducks that aren’t doing well. Some can do okay after being dumped in parks. But with winter and ice, there are so many that need your help, and the more rescuers there are, the better.

A very special THANK YOU goes out to everyone who helped rescue these ducks from the ice at Sugarhouse park as well as everyone who made a donation to ensure they will have long-term food support. Also a special thanks to Ching Sanctuary and the private pond owners for offering help in placing these ducks.

Back home at the aviary, Lionel seems a little bored now that he doesn’t have the Sugarhouse ducks to haze any more. But Olivia hen, who had spent many days alone in the garage winter pen, finally came back out into the aviary after the Sugarhouse ducks were gone. (I think they were just a little too much for her in her old age.) Chester, who was the starving, stumbling Sugarhouse park duck we rescued a few weeks before the rest, will stay here with us. His walk has improved but it is not normal, and he seems content with his uncle Teddy.

That’s it for the saga of the Sugarhouse Park ducks. But we’ll post updates and photos about them whenever we can so we can keep up with them in their new space.